or grabbing that balloon,

What your child prefers? 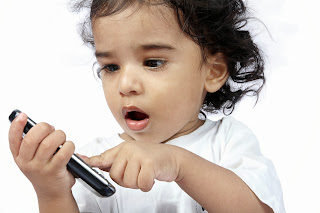 The Effect of touch screens and gadgets on early Child development is the reason behind this common scene in every house. A few months back I saw a video on YouTube where a small child aged 1-year was sitting in front of a fashion magazine, gaming touching and swiping the page with her fingers in an effort to get the images to move.

Again one more such incident which made me stop and compelled me to give a thought to this is of a young girl aged 5 in a movie theatre last week , who wasn’t liking the movie being played on that huge screen so she irritatingly asked her mom  that   “where is its remote? Why don’t you change the channel its so damn boring “

Now this did initiated a laughter blasts amongst the parents and people around but it left me thinking for sure. Is our young generation so habituated to technology that they believe that their like and dislikes can be easily and quickly controlled just at a click or simply pressing a button??

The effect of touch screens and other electronic devices on young children is an explosive issue. Kids are very, very responsive to the kind of stimulation they get from video games, educational or not. In the two years since this video was made, digital industry has responded with apps for babies and preschoolers. Such technology is available at Pre Schools even.

Our concern must be with the negative effects on those children of parents who are unable to put down their phones, tablets and laptops because these babies intently watch their parents and promptly tune into their distraction.

At Shanti Juniors our I3 Learning ladder is implemented for kids to induce age appropriate curiosity and thinking in a children’s mind which will  create a rational and positive creativity  in them.

There is no better substitute for sitting with your children at the end of the day listening and sharing their daily routine, reading out a story to them or even playing a simple game.  A child can no where develop more in any other environment than this one. However glamorous, technological or this digital world gets nothing could be more effective than a Parent –Child Interaction.

Parents must understand this and start acting towards the same before our next generation loses emotional values. These technical gadgets can accompany your child in later years of life but not right now.

Let them Celebrate their Childhood instead of Techno-hood.